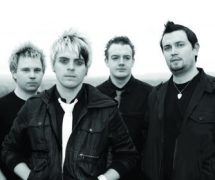 Every now and again a Valleys band comes along and takes the world by storm. With 4th Street Traffic (myspace.com/4thstreettraffic) we have a sleeping giant. Full of energy and swagger, a great sound and fantastic tunes, 4th Street are really something special. From Gelli Gaer and consisting of Alistair (vox/guitar), Dauncy (drums), Eddy (guitar) and Rhl (bass), the four-piece have been together for around seven years, and people are starting to wake up and pay attention of late. “Each year gets better and better, but in a small amount. We get one significant gig, or something else good happens that we’ve worked hard for. In some ways it’s nicer than having it all on a plate!”

An attitude of “work hard, play hard, rock hard” has got them grabbing people’s attention, and now with the new mini-album Kick The Habit, 4th Street Traffic are a dangerous entity. It’s a record full of intensity and integrity, featuring seven great rock tracks, each as impressive as the next. The guitar driven Astray is a bruising track, offering a big chunk of riffage which leads and picks its way in front and between some beefy drumming. If You Go is a more serene and melodic-rock track which showcases fantastic song-writing ability through a change in energy and tempo without losing any of the steel, guts and glory that good rock songs have. It’s the type of song which will have you singing along on first listen.
Essentially a melodic rock outfit, 4th Street are developing their sound as they grow with experience.

This is reflected in the new album which has a bit of a mix of more traditional melodic-rock tunes with some catchy and edgy pop-rock tones, such as personal band favourite and opening track Second Thoughts. “We all love it. It didn’t take long to write as we were all into it quickly, and it’s got a good catchy chorus in it.” Kick The Habit is an album the boys are really proud of as it’s been a big step forward for them, both musically and personally. It’s about moving on and kicking the habit. “We landed a sponsorship which paid for the van and a big pa system, but we blew a lot on drink and partying. We’re more grown up now, and we’ve found our own sound. We used to sound a lot like the Phonics, but our new guitarist has a lot of classic rock influences. I used to mimic Kelly Jones down to a tee, I used to love to sing like him. But now you listen to a lot of the new bands out there, and listening to stuff like Kids In Glass Houses makes me want to write better tunes.”

They go so far as disowning much of their early work. They laugh, “We were young and didn’t know what we were doing, and thought we were going to make it famous after selling 1,000 copies of utter s**t, to be honest. There are two or three good songs on the first album and all the rest is just Phonics wannabe stuff.”

But it is this “growing up” which has helped bring them closer together as a band, as musicians and songwriters. Something seen in the positive group energy that comes through in each track of the new album, recorded at Longwave studios with Romesh. “I’m proud of this album, I’m really proud of it. Romesh did such a good job, it sounds so good, and it’s so us. You can hear all four of our influences in there, and it really feels like we are a group.”

Something else that has worked to great advantage is the bonding and togetherness of the band formed through consistent gigging, although not as a lot of bands would have it! 4th Street Traffic are well known for being one of the top covers bands around. “We do a lot of covers gigs, and I recommend it to every band. It’s the easiest way to make the money to pay for an album, and the more covers you learn, the more you get inspired by them. A lot of people slate bands that do covers, but it’s also a good way of incorporating your own stuff at gigs. And we even sell albums at weddings and things we do. Doing it seems to have built our profile up really well. I like it.”

4th Street Traffic play covers gigs and weddings every weekend, fitting their own gigs in when they can. This consistency has helped them build a big fan base as they stick their own music in the mix. And they wouldn’t have it any other way. “We like playing at Cardiff Blues (rugby) games because everyone is watching you, they enjoy the covers, and they get into your own stuff. You are guaranteed an audience, and it always goes well. It’s a great feeling getting the crowd there singing Giving It Up back to you. And a lot of the things that are free are great for us, so things like the Blues games, and covers, and weddings, people are there because there’s a reason for them to be there.”
Giving It Up is a real hit, where great melodic rock tones meets catchy lyrics, reminiscent of Stereophonics and Bon Jovi. It’s a cracking tune worthy of chart success. And perhaps a big part of their triumphs to date is the fact that they do have this inspiring ability to write awesome melodic rock songs that appeal to a much larger audience than your average band. Friend Of Mine is a thrilling and thumping track with great bounce and energy. It builds and builds, and has you singing along to the emotional lyrics. And it is this ability to write good-quality rock songs that get you going, which puts 4th Street Traffic ahead of much of the competition. The track is featured on the BBC series The Calzaghe Clan, which is a good example of how far they have come, and how far they can go. “It’s only in the last year or so that we’ve had the tidy material to go out there and do our own stuff. We’ve got a new attitude and we’re starting to believe in it a bit more.”

4th Street Traffic should start buttering themselves up for more of this success, which starts by them making it onto the Mike Tyson UK tour, and a support slot with The Alarm. Popularity is already building, the boys reveal their shock of selling out their album release night in Cardiff’s Clwb Ifor Bach in June. “We did the album launch in Clwb Ifor, and we were shocked that it sold out because we’d never played there before and we just thought we’d give it a go. I think the covers gigs helped us pick up loads of fans that we didn’t know about, and they’re all tidy guys.”

And this has given the awesome foursome new vigour to drive forward: “We’re going to do another album in Longwave Studios, and want it to be better than this last one. We would love to get signed, but we want to get signed off the back of someone seeing us and liking us and not asking for favours. We enjoy playing, and we want to continue enjoying to play. We want to get out there and go mad with it. Even if we’ve got to spend a lot of money so that people know us as 4th Street Traffic, not as that good covers band from Gelli Gaer. That would be nice.”

4th Street Traffic are a special band. They’ve got fantastic songs with a big stadium sound. More importantly they can back it up in the live arena. 4th Street Trafficon a one way road to stardom!