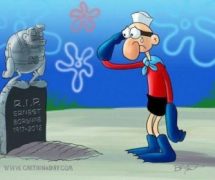 On July 8th 2012 Ernest Borgnine, who played Mermaid Man, sadly passed away due to renal failure at the age of 95. The hardworking screen star enjoyed a career spanning more than 60 years and received an Oscar for Best Actor for his role as a romantic New York butcher in 1955’s low-budget Marty.

His trademark stocky build, gruff voice and leering grin led him to be frequently cast as the villain.

He featured in more than 60 films, including The Vikings (1958), The Flight of the Phoenix (1965), The Dirty Dozen (1967), Sam Peckinpah’s The Wild Bunch (1969) and “The Poseidon Adventure” (1972). In later years, he became well known to another generation as the voice of Mermaid Man on children’s TV series SpongeBob SquarePants.

No comments have been made public by Nickelodeon or anyone else yet, despite the questions being asked if the character “Mermaid Man” will be killed off from the hit kids’ cartoon. However, many cartoon bloggers believe that it is unlikely for them to kill off a kids cartoon character and will probably find a replacement actor to voice the character.