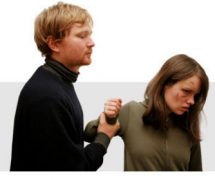 “Alcohol is No Excuse” is the message of an important new partnership campaign being launched in a bid to change the attitudes and behaviour surrounding alcohol-related domestic violence.

Alcohol and domestic violence are often linked, but message behind the campaign, which is supported by its own confidential, informative website is that there is NEVER an excuse for domestic violence.

Aimed at men and women of all ages, Alcohol is No Excuse aims to encourage people to think about their attitude and behaviour while under the influence of alcohol and to take advantage of the extensive support that is on offer.

The campaign will also strive to break down the stereotypes and preconceptions that surround domestic violence, especially when alcohol is used as an excuse by the perpetrator or victim.

The partnerships coordinate and drive the efforts of all agencies that have a part to play in tackling crime and disorder, such as the council, the police, health professionals, the fire service and the voluntary sector.

Working on behalf of all such agencies, the Partnerships will deliver the message of Alcohol is No Excuse via adverts, banners, posters, leaflets and targeted campaigns in licensed premises. It will also manage the website that is supporting the campaign.

He said: “”I am pleased to be supporting this campaign. Alcohol and domestic violence are often linked, but people have to understand that Alcohol is No Excuse.

“There is no excuse for domestic abuse. There are a range of support services on offer, including the specialist unit I visited today and I urge those affected by, or concerned about, this issue to make contact and take advantage of the extensive help on offer.”

Phil Bevan, who heads Community Safety in Rhondda Cynon Taf, added: “This campaign is groundbreaking as we are actively seeking to not only encourage people to get information and support, but to change the way they think about an issue.

“Often domestic violence incidences are excused by the perpetrator or victim because of alcohol. Saying you only hit your partner when you have had a drink or two is simply no excuse. If alcohol is causing you to display such behaviour, even just the once, then you need to think about taking advantage of the support services that are on offer.

“We have launched www.alcoholisnoexcuse.co.uk specifically to appeal to those who are affected by their issues. It is free and confidential and offers a wide range of information, advice and signposting for those who need help.”

Cllr Jeff Edwards, Leader of Merthyr Tydfil County Borough Council, said: “Through this campaign, the Merthyr Tydfil Community Safety Partnership is sending out a clear message, that using alcohol as an excuse for domestic abuse is not an option.

“We would encourage anyone in need of help and support to make use of the range of services available in the area.”

More information on alcohol in our info area.