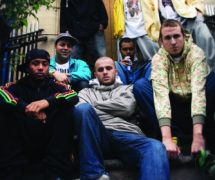 From PLUGGED IN Issue 7

Associated Minds, the hip-hop label based in Cardiff, is now considered to be one of the leading exponents of its genre within the UK scene — giving us diverse talent and music that would rarely be considered to come from a Welsh background. PLUGGED IN needed to find out more so we spoke to Mayor, co-founder of this exciting label

So firstly, could you tell us how you created Associated Minds and a bit more about the artists that you have released.
AM was officially launched back in the summer of 2004 with the release of Mudmowth’s Just To Get The Name Known EP. But the idea had been floating about for a while before that. I’d met my brother in ambition and co-founder, Ruffstylz, at a gig by the legendary De La Soul in Bristol. We were both getting amped in the crowd and formed a bond from that. We’d quickly realised we were both addicted to hip-hop music and had similar views and tastes. Over the following months we ended up working on a few small things together: there were some crazy comedy mixtapes we put out anonymously and then we ended up helping out some local artists and labels with a bit of design and promotion and distro. When we finally put out two more mixtapes by Ruff, under our own little experimental imprint of Tea & Hip-Hop we realised we could take what we’d learned and try and push it up to the next level. Real soon after that we set about forming AM as a label looking to push some genuinely original music, from the artists we knew were about us with a worldwide talent and ambition.
We were joined at that time by The Breaknecks, who were Ralph Rip Shit (emcee) and Harry Macadam (producer) after we met Ralph at a battle Ruff and I were judging. He got to the final but lost, but showed enough insanity and creative energy to spark our interest. We bonded pretty quickly and they brought into the fold with them Mudmowth. We were straight off a family of artists with a national spread — Cardiff, Swansea and London.

Over the next few years we released three records, Mud’s EP, The Breaknecks Music For Bachelors EP and Ruffstylz’s Lyrics CD. I tend to think of that as Phase One of the label’s life. We were doing our growing up in public and still learning exactly how this whole thing works. Despite it all being pretty well received critically and getting us a fair bit of attention, I sometimes cringe listening back to some of the things we did then in our naivety. Overall though I’m still happy about it all. It still makes me smile. Each thing shows a certain quality or passion we were able to capitalise on and I’m happy we got up and did something rather than worrying over the fine details and not getting going. It can be a fine line when you’re starting out between embarrassing yourself through starting too early and making a complete mess of things, versus the learning of invaluable lessons from just getting out there and gaining hands on experience.
Like I said, throughout that period we’d been making a fair bit of noise and along the way the fam expanded to include the incredible Beatbox Fozzy, the cornerstone DJ Paul B and some more incredibly talented producers, Sam Rockwell and Metabeats, as well as PLO.

‘P’ has had a huge impact on the way we do things and it’s fair to say his arrival really signified us moving up to what I see as the Second Phase of our existence — the level where we really can say we compete with everything else out there at least on a professional finish level. He’s an incredible mix engineer, but also a multi-instrumentalist, and one of the most talented producers I’ve had the pleasure knowing. He’s put a lot of that effort into helping polish off the creative rawness of the others.
We were all maturing in our respective roles at that point and the marker of that was the release of Ralph Rip Shit’s first solo 12in vinyl I Got The Best Name — getting mass acclaim and featuring a whole host of UK talent. I think that stands up as a great record years on. I still bump it loud and have the involuntary head nod. We had a great time making that record and the cover was a labour of love from myself and the folk over at Southpawvision and one dirty ass tee going to see 144 friends and associates of Ralph’s.
After that we released Metabeats’ Metaphysical LP to even greater acclaim and that cemented him as one of the top new producers to watch in the UK. That LP kinda represented most of the talent in Cardiff on one record. I love it for that as well as the fact it’s a straight up great record. It’s raw headnod. And it’s an actual album, not a group of songs — know what I mean.
We just released Mudmowth’s Circus In The Cemetery as well and that’s going great. Right now I think it’s fair to say he’s the leading individual emcee in Wales in terms of the attention he’s getting, and with him and Metabeats about to put out another EP it’s only gonna get crazier. We’re lining up to have an incredible year with a whole host more releases in the pipeline hopefully.