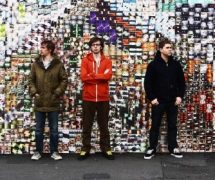 We recently got the chance to interview Mercury Music Prize nominated band, GoGo Penguin. We talked about the industry, challenges, advice and much more.

Where did your band name come from and how long have you been together?

Wefirst got together to experiment for no other reason than we had some ideas andwanted to hear what they would sound like. There’s a great gig in Manchester run by EfpiRecords and someone pulled out at the last minute and we were asked if we couldcome play. We realised on the day that we didn’t have a name and there was astuffed penguin nailed to the wall where we were rehearsing. Someone suggestedto call it ‘Oeguin’ someone else said ‘Go Penguin’ then someone said ‘GoGoPenguin’ and that was that. We’ve been in our current line up since January2012.

What’s your aim in the music industry, is there anyone you’d love to maybework with one day?

Wejust like making music, I think that’s the only real aim we have. We’ll seewhat the future brings.

What genre do you consider your music to be, who inspired your music?

That’sa difficult question. Between us we’ve played and studied pretty mucheverything we’ve heard and we’re inspired by all of it. There’s obviously the jazzelement which is evident in the instrumentation and the fact that we improvisebut a lot of the ideas are taken from classical composition and IDM and otherdance music. For the last album we were listening to a lot of Thom Yorke, ArvoPart and Burial which has left its mark, but to be honest we don’t reallythink of music in genres – it’s all just music to us.

What did you do before the band formed, would you ever go back?

We’veall just been musicians, None of us would do anything else.

How did the band form, do you belong to a record label?

Wemet through the Manchester music scene, playing in different bands andprojects, Between us we’ve played in everything from orchestras to folk groupsand major hip hop artists as well. The band is signed to Gondwana Records.

What’s your favourite city you’veperformed in?

We’veplayed all over, more recently in Europe whichhas been really exciting. We’ve played sit down concert halls as well as dancemusic festivals such as ‘Dimensions’ in Croatia. It’s been great to see howthe music seems to fit all sorts of venues. Our favourite city is Hull.

What’s the biggest challenge about being in a band, what’s the best way toovercome that challenge?

Forus, the band is very democratic, this has its ups and downs. Fortunately 99%of the time we’re in agreement so it’s been quite easy. You have to respecteach other and be patient.

What’s the story behind the new album, who wrote the songs?

Thestory is for the listener to decide, it means something to each of us as we’veput our heart and souls into it but ultimately it belongs to whoever islistening to it and means whatever they want or need it to mean, it’s neutralin that sense. We all write the music together, people bring differentideas or compositions to the table and we work and develop them together.

How many albums to you plan on releasing throughout your career?

Would you like to acknowledge anyone right now for any financial or emotionalsupport they may have given or still are giving you?

ObviouslyGondwana records have been instrumental in the band, the label is run by MattHalsall and his help and support has been magical.

How could soon-to-be fans find out more about you, do you have a website orsocial networking page?

What advice would you give young people who want to break into an industrynot just music but any performing industry?

To go with this new release, the band are offering fans and budding remixers the chance to download and remix a track from the album and win cool prizes, check it out here: