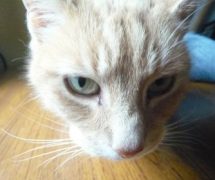 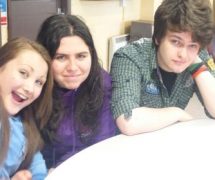 So my journey started at Treorchy Train Station, and as the train arrived, I could feel butterflies of excitement fill my stomach. I was catching the train on my own so I felt a bit of a loner. That is, until this cute, cross breed dog came over to me and wanted to be friend. He was pestering his owner and as I was munching on a few pringles, his owner asked “Could I nick one of those please?” so I gave him one. He held it up in front of the dog and commanded him to do tricks to which he obeyed. That was me amused for the first 10 minutes of the train ride! As the dog and owner departed the train, I was left alone once again. It wasn’t so bad though as the train ride was almost over- though my journey to Welshpool was just beginning.

When I arrived at Pontypridd Train Station, Toriabeth! was already there along with Luna Light. We began talking and moments later Crazydistortion turned up just a few minutes before the bus arrived.

The bus journey… well for starters it wasn’t anywhere near as long as the Anglesey trip, which as you probably know took a whopping 10 hours! Instead, this journey was just 3 hours long and consisted of silly word games, snacking on…well…snacks and listening to CD’s I had nabbed from my dad’s radio show. Toriabeth! and I sang along to Queen without a care in the world as per usual. After a quick stop half way and the rest of the journey, we finally arrived at Red Ridge Center- our destination for the weekend. Our bus was the first out of the three mini buses to arrive so we just explored the place and found our rooms. I was sharing with my fellow Wicid girls, Luna Light and Toriabeth! so I was pretty pleased with that. Shortly after, the other two buses arrived.

After everyone from the other buses found their rooms it was by then tea time. We had more or less what you have on a roast dinner which wasn’t too bad. Once we had finished, we then headed to the lounge (or as other people called it “the room with all the chairs) to set some ground rules and were told what we were doing over the next two days. There was then some form filling before free time. I spent the majority of the time with DanClic, Toriabeth! and some other people whose names escape me (sorry!). We just messed about, explored the place and whatnot before finally deciding to go to bed to at least attempt to get some sleep. Oh, and we found a cat which I think is Dan’s new best friend and a dog who’s rather hyperactive.

When morning came, we had a morning wake up call – probably the only thing I actually disliked about the residential, as I hate early mornings and love sleep. Anyway, we stumbled out of bed, got ourselves ready and headed to the dining room for breakfast. Thankfully, this time the toast wasn’t half burnt or half warm bread. After brekkie, we got into our groups for the OCN training. I went along with a few others to do ‘Photo Diary’ which was good fun. We then had some lunch before heading off to do some outdoor activities. Since I’m not the adventurous type, I asked could I just hang around and take photos of the others – which I was allowed to do (thankfully!). Even though I didn’t take part, it was fun to watch the others be brave and support them as they took part in the activities. There were three activities over all – rock climbing, caving and archery (which I actually took part in after having experience thanks to the Wicid Residential). I think caving was the overall favourite for the group I was hanging around with, and by the sound of things, everyone was pretty good at it too.

With the activities completed, we had a little bit of more free time just before tea. I sat with Dan and Toriabeth! who claimed that the table we were sitting on was the “cool table” and only certain people could sit on there. Nice to know that I’m considered cool to some people! Once we had scoffed our food, we then continued with finishing our OCN’s before having some more free time. Bet you can’t guess who I hung around with! We mainly stayed in the games (well.. pingpong) room and mucked about some more before heading back to the lounge for Clic’s Got Talent. There were quite a few people who went up to take part of the talent show – me being one of them. Toriabeth! nagged me into singing with her. I did drop out at first after having memories of some fool signing me up to sing in the school’s Eisteddfod in year 7 without me knowing, but she began to pout. Her puppy eyes softened me so I ended up going up to perform anyway. We sang to Queen’s ‘Don’t Stop Me Now’. When it came to the line “Cause I’m having a good time” that’s exactly what I felt. I just thought “Who cares if I can’t sing? I’m having a good time with my friends and that’s all that matters.” We left some music playing after the talent show and just mucked about dancing to things like ‘The Macarena’, ‘Cha cha slide’ and ‘the ketchup song’. I only joined in now and then because… well I couldn’t be bothered to dance. Lazy of me I know, but hey, I’d been doing a lot that day!

At about 1 in the morning, a few of us were then in the dining room telling cheesy jokes before I decided to be all hyper and made Dan come on a walk around the centre and find other people to come around with us. At one point we went to the lounge, where Dan asked “I wonder what’s in here? Let’s go in!” I thought it was a bad idea, but he insisted, so I decided to go along with it. We ended up walking through all these random corridors until somehow, we all managed to end up at my room. How? I have no clue. We decided to go back downstairs and see where everyone was. That’s when we decided to play spies and spy on what the others were up to. We ended up being caught by Crazydistortion so we ended up in his room along with a few others (sorry, I can’t quite remember who altogether!) and just talked and had a laugh (including the point where Dan insisted on bringing a horse into the building which he’d found but he didn’t do it in the end. Wimp!) before more people went to bed, and there was a small group of us who were still awake so we nagged Dan to take us on a walk, to which he agreed to. We were originally supposed to just be next to the smokers area until someone pushed the cave door and found that it was open. We all went inside (covering the holes that led to the actual caves to stop others from going in. We were only going to sit in the little room before it) and played a bit of Chinese Whispers. That’s when I decided that I needed to try to sleep some more so I headed back to my room.

Sunday morning we had another wake up call and again stumbled out of bed, got ready, packed and went down for breakfast. We were all bragging about who stayed up the latest. I think 6:30am was the latest time that someone stayed up. After breakfast, we had another meeting, went to complete our OCN’s and then held a showcase of the final pieces we had created for them. Then, it was evaluation time, freebies time, photo time and finally time to say goodbye as we filled our mini buses with our bags and departed. We stopped for a Burger King on the way home where we bumped into the other mini bus and hung around with them for a bit before travelling the final part of the journey home.

All in all, it was a great weekend and I really enjoyed it! As I’m writing this, I am beyond tired thanks to the lack of sleep I had and I’m pretty sure the majority of the others are all in the same boat as me, but it was worth it.

6 thoughts on “CLIC Residential To Welshpool”