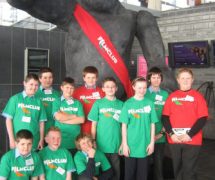 A group of e3+ ‘Movie Mania’ club members visited the Senedd in January to tell AMs why they, along with leading figures from the Welsh film industry, believe FILMCLUB should be made available in more schools across Wales.

The ‘Movie Mania’ club is only one of eleven FILMCLUBs across Wales and has been running successfully as part of the e3+ Programme since January 2009.

The young people had a fantastic time at the event, being interviewed by members of the press, being photographed with a giant King Kong and speaking to Beeban Kidron, co-founder of FILMCLUB and director of films such as ‘Bridget Jones: The Edge of Reason’.

Jessica Anderson, Yr 8, said, “I feel quite honoured to be here today, representing FILMCLUB in such an important place. I’d really like FILMCLUB to be in more schools it’s a great way to make new friends and share opinions with people you don’t normally talk to.”