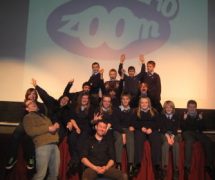 e3+ participants have been showing off their movie-making skills recently and have scooped a top award at the Zoom Young Filmmakers Festival 2010.

The young people have been busy over the last few months working with LilyPad Films, who run the e3+ movie-making workshops at Treorchy, to create their own movies.

The budding movie-makers named their film ‘The Message’ and won the Best Film (age 8-13) Award at the ceremony in March. The film had previously won Best UK Short at the International Youth Film Festival in 2009 which was showcased to various Assembly Members at the Senedd last month, including Leighton Andrews, AM for the Rhondda and Minister for Children, Education and Lifelong Learning (pictured).

Another film produced as part of the e3+ movie-making workshops, ‘Two Girls One Boy’, is also tipped to scoop an award at the Swansea Bay Film Festival later this year.