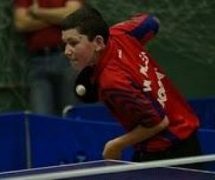 12 year old Chris Griffiths today became the first national champion from TTK Ferndale winning the under 13s Welsh Championships at the Welsh Institute of Sport in Cardiff. Chris who was introduced to Table Tennis when he joined Ferndale Community School in September 2008 through the Greenhouse project has made massive strides in such a short space of time and is now champion of Wales!!! This tops off what has been a remarkable season for Chris who has won 3 English Competitions and now the Welsh title. In the final Chris raised his game to beat Welsh International Ashley Perry from Ael-y-Bryn in 3 straight sets.

Not only was it a great day for Chris but fellow TTK Ferndale players Liam Winder and Kieran Tann also had a brilliant tournament reaching the semi final stage. Ethan Lewis also made it through to the quarter finals but was drawn against inform teammate Griffiths, Ethan did however have a great win against the eventual finalist Perry beating him in the group stages. Tann picked up good wins on route beating Thomas Heydon of Swansea in the quarter final before losing to Chris in the semis in what was probably the match of the competition with both boys playing out of their skin. Winder who also excelled on the day had a close fought victory over Tonypandy’s Steffan Jecalik in the quarter final stage before losing 3-1 to Perry in the semis.

Year 7 Dylan Bruford and year 6 Darran Park primary player Charlotte Slye were also in attendance with Bruford reaching the semi final of the consolation. Charlotte with 2 years left at this level enjoyed the day and will benefit from the experience.

Ferndale had 3 players in the top 4 positions and when you consider that all the best under 13 players from all over Wales were in attendance it makes the result even more satisfying.