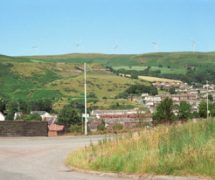 So, work has finally begun on the Wind Farm planned for the mountain between Ferndale and Ystrad in the Rhondda and yet again residents are enraged and are complaining. According to the local newspaper, one resident said:

“The Valleys are finally going green again and looking good do we really want to put these structures up there?”

I can understand that some people may feel hostile towards these new plans and sceptical about the benefits, but if the non-renewable energy sources are running out, surely this is the only way forward? And windmills aren’t going to make the valleys any less green. Only more green and modern.

The government has set a target for 15% of our energy to be supplied from renewable sources, such as wind power, therefore, this is a opportunity that can’t be wasted. Eventually, all energy will have to come from new, sustainable sources and if the Rhondda has been scouted as a perfect site for a wind farm, I think we should be proud of the fact that we can accommodate this exciting new project which would power 5500 homes a year.

One of the concerns raised is that the the windmills will be an eyesore, but windmills are very pleasing to the eye when compared to, for example, a coal power plant.

I don’t know much about environmental issues and I’m definitely not on a crusade to save the planet but I do know that one day we will run out of oil, gas and coal and that’s by far an uglier prospect than a few windmills on the mountainside.

(The image is from the energy company’s website and is a photomontage of what the wind farm is expected to look like).