Home » News » Your World » Future Of The Left 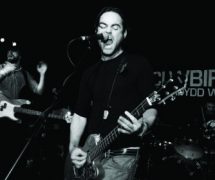 From PLUGGED IN magazine Issue 7

In a time not long ago two entities ruled over many a musical minion. One was known as Mclusky and the other as Jarcrew. But following the implosion of both, 2005 saw a new, bigger and mightier force created. It is known as Future Of The Left.
Consisting of Andrew “Falko” Falkous (singer/guitarist), Kelson Mathias (bass/vox) and Jack Egglestone (drums), FOTL have been gathering great momentum since their conception, and released second album Travels With Myself And Another on 4AD/Beggars Banquet in June.
If the abrasive and outrageous riffs produced by the enigmatic three-piece on the devilishly good debut album Curses (released in September 2007) is anything to go by, Travels With Myself And Another is going to be one hell of a ride. But don’t expect the expected.
Previous singles such as Manchasm (08) and Small Bones Small Bodies (07) are typical of the quirky and insane obtrusion fashioned by FOTL. Speaking to Falco, he told me, “Our music is a little bit trickier than your run-of-the-mill rock music. I don’t really think we are an experimental band. I understand that we don’t have an obvious pop appeal but we try to write pop songs and give them a twist.”

Crank up the volume and you receive a heavy dose of well crafted riffage smelted into a medley of harmony and vocal expression that bends from Falco’s scream to melodic charm. “Riffs fall out the sky 10 times a rehearsal. But the trick is some kind of riff or musical progression or harmony which is musically interesting enough, and then a vocal melody which takes the ideas or the feelings created by that riff and pushes it even further.”
And having made waves of followers by making music that pushes many boundaries (both lyrically and musically) the trio can be assured their passion is not in vain. “We are just a rock band who believe in trying to communicate with people across all the available dimensions. “It’s a desire and a compulsion to make music. I want to be in maybe not the biggest rock and roll band in the world, but the best rock and roll band in the world. That’s one of the things that motivates me and I know it motivates Jack and Kelson as well.”

Curses is one hell of an album, and featured 7in vinyl singles Adeadenemyalwayssmellsgood and Fingers Become Thumbs! This was followed up with live album Last Night I Saved Her From Vampires, recorded from shows at London and Cardiff, which catches the band at their best. “It’s something we are proud to put our names to. Selling a T-shirt with your band’s name on it is just a bulls**t way to make £10 off someone who’s really into your band and would spend their money on anything. If they are spending that money I would rather give them something which had something to do with us.”

At the same time as the live album came the release of the first single from this new album. The epic The Hope That House Built carries a cool, smooth, bouncing riff, although Falkous’ immense scream makes you soil yourself from time to time. And that’s just the kind of thing FOTL would have you do, with their off-cut humour. “The thing with our band, for better or worse, is that what we are trying to get across, without being crass about the whole deal, is the personality of the band. All the dimensions of it. The rediculousness of it. The humour aspect, without it being like the Bloodhound Gang. And a sense of how important the band is to us, without being all pro-faced about it.”
One of the lyrics on this one is ‘In the end everybody wins’… and FOTL is on to a winner. FOTL is ballsy, it’s in your face, and the best thing about it is that once you listen to their music you’ll have to see them live. Falkous admits that “one of the strengths of our existence is the way we play live. Some of our songs are pretty much written with the live show in mind.”
However he concedes that the new album sees the band taking the next step forward to become a more complete article. “There was a little bit of a change in direction for the new record, as in that two or three of the songs we wrote for the record — and then had to see if we could play them live afterwards. It was a different process. And that’s worked very successfully in terms of the record. And maybe that will help give the record a little more in terms of colour and something unique and or additional to the live show.”

Maybe this move from the crushing and dirty tones apparent on Curses to the more suave sophistication in the dramatic riffs that appear on the new record is down to experiences brought together from Mclusky and Jarcrew. “Being in previous bands has helped us understand the processes of how a band works, and also doesn’t work. And we have that bit of extra experience about enjoying the good times when they come and taking the bad times (which there are many) with a pinch of salt whilst learning from that experience.”
And this certainly seems to be paying off as Travels With Myself And Another has given them the opportunity to develop the sound and feel of the FOTL machine, which can be seen in tracks like Throwing Bricks At Trains and Lapsed Catholics. “I’m really pleased with how it’s developed musically. I think, certainly, we’ve topped the last record with this record. And personally we are all still friends and we don’t want to kill each other. We’ve gone well beyond my own personal expectations. I truly believe that had we been an American band then we would have been 10 or 20 times more successful than we are. We are fortunate in terms of the music we make and how happy we are with it. But unfortunately our music just falls between too many stools.”

If FOTL wanted to make a musical statement, then they’ve done it with the album’s opening track Arming Eritrea, which is industrious, carries swaggering melody and twists to an intriguing finale. “That kind of thing happens very easy with us, but everything is dictated by the vocal melody. The music doesn’t sound like it would be the primary motivation, but everything fits around the vocal with the exception of a couple of songs.”
Indeed, Falco suggest that “lyrically this album is a little bit more focussed, but I never sit down and decide to write about a particular subject. I like the idea of looking at situations a little differently. Other songs I write are verbal manifestations of some stupid little story that I’ve got hounding around in my head. On the new record there is a song You Need Satan More Than He Needs You. I became fascinated with the idea that there could be Satanists out there who are trying to hold down daily jobs, or arrange a babysitter for the children and then work out how to get a goat back from a blood orgy without getting s**t all over the car. Its just as valid a subject to sing about as drugs.”

At the end of the day FOTL are good old rock and roll with a twist of insanity — “that’s what we aim for.” The new record Travels With Myself And Another is a must listen. But be wary, it’ll exceed your expectations. FOTL always do!