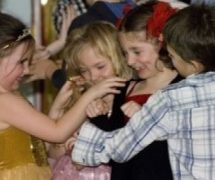 Billy and the Dragon – children’s puppet opera, was created by pupils at Glenboi Primary School, as part of the end result of the Welsh National Opera’s final Street Songs project “No Strings”.

Over 100 pupils aged 3-10 years old took part in the project, which allowed them to write their own original songs and opera based upon their future hopes and dreams for their lives and the valley in which they live. The pupils also had the opportunity to create puppets to act out the opera and learned film making skills to create a DVD of their very own opera.

The premiere event, held at the school, featured a live extract performance of music from the film performed by Glenboi pupils, alongside Soprano Jennifer Walker and Composer James Clarke.

Head of Music at Rhondda Cynon Taf Council, Rachel Kilby, said: “This project has been an amazing success and has encouraged the children to learn new skills in singing, writing, composition, performance and puppetry. It has also enabled them to learn about opera, something that many of them may never have had the opportunity to do. The film is fantastic and is testimony to the hard work of the pupils, the Welsh National Opera team and the teachers at Glenboi.”

Councillor Eudine Hanagan, Cabinet Member for Education, Skills and Lifelong Learning, said: “It is great to hear that children as young as 3 years old are experiencing the beauty of opera and are taking part in this unique project. The story they created is refreshing and has some lessons in there for us all.”

The pupil’s film has now been put forward for various competitions and will be shown as part of the Welsh National Operas ‘No Strings’ event later this year.