Home » News » Your World » HAVE YOU GOT THE PHOENIX FACTOR?! 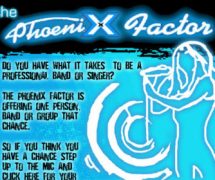 BEI bring you the hottest show this season. “THE PHOEN!X FACTOR” Can you sing your way to the top to become the Rhondda’s new signed talent and the first Phoenix Factor Idol?
We are looking for people any age (over 12 though!) to compete in an Xfactor style music contest for anyone.

Anyone over twelve can enter, it doesn’t matter you sing current pop or classic hard core rock, any music genre is accepted, and you can enter under the following categories:
Under 17 boys,
Under 17 girls,
Over 17s
Bands and groups.

Auditions will take place in front of a live audience and the entire contest will be recorded and aired on several radio stations.

A panel of guest judges will select the best acts who will then go on to boot camp to be professionally vocal coached before performing in the live finals.

The winner will become the PHOENIX IDOL ’10 and will be interviewed on air, as well as having their song professionally recorded in a recording studio, both to go on CD and to be played by many different radio stations across RCT.

You will also be offered a management contract giving you the opportunity to perform in some of the hottest gigs in RCT and start your journey to fame!

Proceeds from the contest go to several charities including community cancer services
So what are you waiting for? Step up to the mic and take your shot at success!

If you don’t want to compete but would love to be in the audience or enter one of our fantastic competitions, you can find out more on our website.

Auditions are coming soon to a place near you. For more info visit the website. Don’t forget it’s for Charity!!!

www.phoenixfactor.co.cc or Facebook us simply search “the phoenix factor”