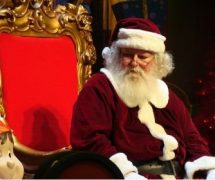 One day in the North Pole, there lived an Elf named Humphry. He was the only elf that couldn’t make toys. He was useless! Everyone picked on him because he was different.

Santa said to Humphry “Now, listen to the fat man. If you start believing in yourself, you’ll make them toys!”

So Humphry kept trying and trying, but he couldn’t do it. He said “I’ll never be like everyone else, I’m a goodly rotten apple!” Because of this, he ran off outside, but didn’t know his way around the North Pole and got lost in the middle of Candy Woods.

He walked through the woods slowly When, all of a sudden, two ugly trolls came out in front of Humphry.

“That would probably be me” replied Humphry. The troll grabbed Humphry and threw him to his sidekick. “Hold him there while I get some rope to tie him.”

Then, all of a sudden, the sidekick fell asleep as he hadn’t been to sleep for weeks! Humphry slipped out of his arms and screamed far away from the two trolls.

Santa heard these cries and followed them to see Humphry caught by them again.

“And what if we refuse, fat man?” asked the Troll.

The same night, when Humphry was about to go to sleep,  he made a wish, that he could make toys like everyone else. This was Christmas Eve.

The next day, he found that his wish had came true, and he lived happily ever after.