Home » News » Your World » I Ain’t Stealin’ From Captain Jack… 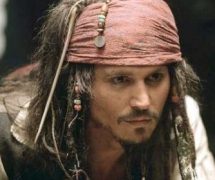 Excuse the failed pirateness of the title, But I shall continue.

The third of May, Johnny Depp and Stephen Jones (singer in the band Babybird) left a recording studio in Los Angeles. Depp is a big music buff, so much so that he had just recorded a guitar solo for a new track for Jones’s band, Babybird.

But, it turned sour, it did.

As they left the recording studio, they were approached by a man. That man held a broken bottle, and went on to threaten Jones and demanding money.

“It was an extremely scary moment. This guy looked off his head. Johnny looked him straight in the eyes and told him to back off,” a friend of Jones said.

As Depp intervened, the mugger backed down. Then went on to say that he would not rob the actor.

Reason? It seems that the robber is an avid fan of Pirates Of The Caribbean. What are the chances in that happening, eh?

“He looked at Johnny and said, ”I ain”t stealing from Captain Jack” and put the bottle down.” the friend said.

But, was that the last of it? No. No it wasn’t. Well, it would’ve been disappointing if it was and I mislead you like that. Well anyways…

After realizing that the man would not be stealin’ from Captain Jack, “Johnny Depp gave him a few bucks and told him to straighten up his life”.

In celebration of this article, and the fact that Pirates Of The Caribbean was involved, if you comment, you will have to comment in the style of a pirate. And before you even think of it, no “who’s a pretty boy then?” gags. Okay?

2 thoughts on “I Ain’t Stealin’ From Captain Jack…”