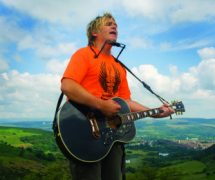 From PLUGGED IN Issue 7

‘There is a parallel between getting well from a major illness like cancer and climbing a mountain. I initially got the idea of performing on the top of Snowdon when I was being treated in Ysbyty Glan Clwyd and could see the mountain from the hospital window. It gave me something to focus on and I told myself that when I get well again I’m going to climb up there.”
Mike Peters, the legendary frontman of 80s Welsh rock band The Alarm, spoke to me after performing in front of over 80 people on the summit of Darren Y Bwllfa overlooking Dare Valley Country Park in Aberdare as part of his Rhondda Rocks event (which took place on 27th June). This was the first time he had attempted one of his now famous events in the South Wales region in aid of his Love Hope Strength Foundation, a cancer support charity that seeks to invest money into the local area. All the money raised from this high level acoustic set, walk and subsequent concert in the nearby Coliseum Theatre went towards the mobile cancer treatment unit run by Tenovus.

Previous walks, such as his record breaking highest concert ever at 18,500ft in the Himalayas, provided much needed help in nearby Katmandu; while a trek to Machu Pichu and the following concert in Peru provided aid in the capital city of Lima. And as we walked up the hill on that sunny Saturday the actor Kevin Bacon and his brother, who are in a band together, were simultaneously walking up and performing on Pikes Peak in America accompanied by hundreds of supporters in a sister event for the Foundation, which helps American charities too.
Peters’ inspiring Foundation is also the charity of choice for Red Rocks, the famous music venue in Colorado. “Every event this year at Red Rocks is a Love Hope Strength event, but besides the charitable donations we get we are encouraging people at the concerts to join the bone marrow registry. Already through this we’ve found 12 matches, which means we’ve helped save 12 people’s lives. A real result.”
It was Mike who ignited this chain reaction of events. So what drives him? “People who come back from such an illness tend to do something extraordinary. I just wanted to play a gig at the top of Snowdon for all my Alarm fans and see how many people would follow. The support was fantastic inspiring people who would not normally do this sort of thing. Also I’ve always enjoyed walking around places like this,” he adds pointing to the vista of the Cynon Valley around us. “With its views and the experiences I’ve felt, it’s inspired to write the songs I do. I like the idea that my fans can experience what I felt while writing.”

It was while doing some soul searching walking around the Valleys that he wrote the classic Alarm song Brave New Wales, a song he performed at the summit of Darren Y Bwllfa along with others that included the theme tune for his foundation Love Hope Strength. He stood atop a rocky outcrop in the glorious sunshine in his brightly coloured orange T-shirt and sang beautifully to the appreciative gathering who applaud him for more than his performance, but also for his achievement and positive attitude. Never the one to take all the glory Mike was joined on the impromptu stage by up-and-coming local talent Chris Summerhill — who after securely tying his pet dog, took up his mandolin to join Mike in a busk through some more numbers, including Kings Of The Road.

With his son Dylan on his shoulders as we make the descent back down to the Country Park’s Resource Centre, I ask Mike about his legendary performances — he is renowned for getting on stage and playing for over two hours. In Issue 3 we reported on one of his St David’s Day gigs and commented on the fact that he didn’t even stop to sip water. “Sometimes I just forget, I get so engrossed in the situation. And as I never run to a set list I just keep going. I like to see how the crowd reacts and go where their mood takes me. I think that’s why The Alarm and myself have such an audience. We’ve always been able to respond to what’s going on with the crowd.”
Will there ever be a point when Peters says enough is enough? “That’ll only come when I stop enjoying it. I include my whole family in these events, it’s part of my life. You still see Neil Young and Bruce Springsteen doing Glastonbury this year, so I think there’s a need for good music. I don’t buy into this ageing thing and if there is one thing that’ll define this decade musically is that it’s full of one-hit wonders. There’s a fashion aspect that has developed with music today, following trends — a real build them up, knock them down attitude of the media. Groups are rarely allowed to develop at their own pace. The only recent example of a band being given time to develop has been the Kings Of Leon who were hardly noticed outside the UK for their first two albums, even though they’re American, but have gone worldwide with their third album Only By The Night.”

We reported in Issue 2 that Mike was presented with an Outstanding Contribution to Music Award at the last Pop Factory awards. What does he believe is his contribution to music? “That’s a difficult question, but I believe I bring enthusiasm and energy to the genre. To come and watch The Alarm is great for a music fan and maybe gives them the faith back as to why they loved their favourite bands in the first place.”
Later that evening, the fund-raiser gig saw a whole host of people performing at the Coliseum, including Monster hit-makers The Automatic, local upstart Chris Summerhill, the Pendyrus Male Voice Choir and ex-Stereophonics drummer Stuart Cable with his recently signed band Killing For Company. Mike’s performance itself had the audience in raptures and won a standing ovation, especially when he was joined on stage by the 3Gs Community Choir made up of young people from nearby Merthyr Tydfil. The night ended with a complete ensemble cast of performers singing Bob Dylan’s Knocking On Heaven’s Door. A great end to a great day — for all involved.