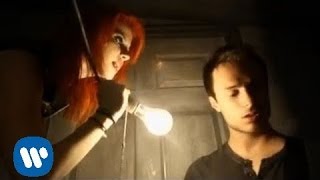 Paramore were once an insignificant band from Franklin, Nashville, Tennessee, though it’s hard to believe with the success they’ve been having recently. They formed in 2004 with members Hayley Williams (vocals), Josh Farro (Lead Guitar, backing vocals), Zac Farro (Drums), Jeremy Davis (Bass) and Taylor York (Rhythm Guitar) and went on to release their first album “All we know is falling” in 2005.

Though the album, in my opinion, is maybe one of their best, they became noticed in “Riot!” for their fast, loud pop-punk sound by mainstream lovers and by people who wouldn’t normally have listened to them. “Riot” turned platinum very quickly, and unlike most bands, they have not succumbed to the limelight and resorted to feeble begs for attention.

On September 29th 2009, Paramore released their third album, “Brand New Eyes”, undoubtedly the beginning of many more to come. I’m positive that this is their best album yet.

Careful:
The album starts of with this fast, furious song which kicks off the album perfectly, depicting the main mood of this album. It has some quick, reasonably heavy guitar riffs and combined with the expert bass-line of pro Jeremy Davis, the sick drum beats of the youngest Farro brother, Zac Farro and Hayley Williams’ heated vocals, it’s one hell of a song. “You can’t be too careful anymore, with all that is waiting for you”

Ignorance:
Ignorance is probably the best known of the album, and with good reason. It was the first single in “Brand New Eyes” to be released and it conveys the furious limits the band went to at the end of their “Riot” tour and how close they were to breaking point. This is definitely the angriest song “I don’t wanna hear your sad songs, I don’t wanna feel your pain, when you swear it’s all my fault, ‘cos you know we’re not the same”

Playing God:
For a song with a kind of mellow tone, the lyrics are pretty harsh and it works really well. The part of the song that stands out most, and is most definitely the best part, is as Williams yells at guitarist Josh Farro “This is the last second chance”/“I’m half as good as it gets”/“I’m almost out of defence” and he yells back “I’ll point you to the mirror”. This is one of the best tracks on the album.

Looking Up:
Without a doubt, this is my favourite track on the album. As much as I’m in love with angry songs, particularly Paramore’s angry songs, this one is not angry and it still tops my music expectations. Williams sings “God knows the world doesn’t need another band, what a waste it would’ve been, I can’t believe we almost hung it up, we’re just getting started!” and I couldn’t agree with her more! This band can sing any genre and sound great, sing happy/sad/angry/fast/slow and still sound amazing. An effective point in the song is as the music fades and a sudden guitar riffs brings the song back in. 10/10.

The Only Exception:
One of the two acoustic tracks on the song, The Only Exception is set to be Paramore’s next single and it’s different to all of their other singles. It’s not loud, angry or quirky yet it works. The emotion in it is evident and it’s beautiful to listen to as Williams tells the story of how she watched her “daddy” cry and break his own heart and how her “momma” swore she’d never let herself forget, going on to say that she’d never sing of love if it doesn’t exist but “you are the only exception”.

All I wanted:
In this song, Williams shows us the power of her voice to an extent she hasn’t before. Though continuously throughout the whole song, she hits the same note, there’s a part around two minutes in where everything stops and she’s still standing, still singing. It’s one AMAZING song!

These are only six songs from the twelve track album (which includes Decode, the massive Twilight hit that has caused both the love of new fans and the outrage of old fans that these “twilight fans” aren’t fans). The album is a total must-buy and it’s a great listen! 10/10 for all the effort put in and the quality of the album. It shows how much Paramore have progressed since “All We Know Is Falling”.