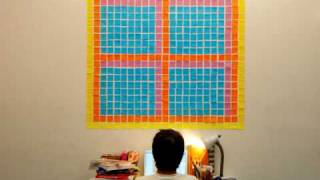 So, on the first day of January we sang happy birthday to the planet Earth, as it survived another year with no nuclear apocalypse.

But, a much bigger celebration has arrived for our attention, and no, it’s not the return of Britain’s Got Talent.

It’s the thirtieth anniversary of the beloved Post-it Note. Huzzah!

And to think, the birth of the Post-it was a mistake by the scientists of 3M, when they accidentally stumbled upon an adhesive like no other that could stick and be repositioned on just about any surface.

Since their release in the eighties, they have remained among the top five best-selling office supplies in the US every year. Nice.

The three-by-three inch pad (that’s 7.6 by 7.6 centimeters) has grown over time, and now comes in eight different sizes and twenty five shapes. It also comes in over sixty colours, including the original canary yellow, and is sold in 150 countries.

“It’s one of those things that can’t get any better than it already is,” stated Syracuse University Professor Of Popular Culture, Robert Thompson. “Nothing comes close to replacing it, not a beep on your phone or a digitalised reminder.”

He added, “My guess is people will still be using Post-It notes in a hundred years; it represents some things that were very prominent in the 80s: a much more complex life and the desire to control that complexity.”

The inventors, 3M scientists Arthur Fry and Spencer Silver, were inducted into the National Inventors Hall Of Fame last month.

The group has launched a competition for students aged 11 to 18 to create original artwork out of Post-it products. 3M has also launched a new product line, the Post-it Greener Note, which is engineered with a plant-based adhesive and fully recycled paper to be more environmentally friendly.

So, three cheers for the Post-It Note. Thirty years-old this month, and doesn’t look a day over twenty-nine and a half.

In celebration, I shall rave while eating a bumper pack of Haribo. Nice.