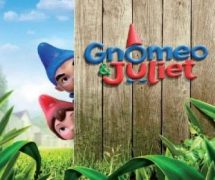 Note – There are spoilers in this review, though as this film is a remake of William Shakespeare’s classic Romeo & Juliet, we’ll let it slide…

There’s no pussyfooting around the fact that William Shakespeare knew how to write a tragedy. To pretend otherwise would just be foolish. And of course, it was only a matter of time before his most famous play of all was introduced to today’s youth in a format other than a poorly scripted episode of The Suite Life Of Zack And Cody.

I am, of course, talking of the latest twist on Romeo & Juliet. Who would’ve guessed it would involve garden gnomes?

I will say that since the moment I saw the trailer I was more interested than I would have first thought, attracted by the all-star cast if anything. Who wouldn’t want to see a cartoon fawn with the voice of Ozzy Osbourne? (This being the only trick up my sleeve used to persuade my boyfriend to see it with me instead of Paul). And I have got to say that, despite Ozzy uttering no more than about six lines throughout, I don’t think that I stopped laughing.

Okay, I know it’s a little sad, albeit very down my street, to sit through a kid’s film and thoroughly enjoy it, but I can assure you, I wasn’t the only person above the age of seven giggling. D’you know when you watch the Disney film you loved as a child a few years later, when your sense of humour has evolved to notice subtle jokes which no child should ever understand? Well, those at Touchstone Pictures have perfected the art of slipping in a few clever puns which will have anyone of secondary school age and up in stitches. It’s a very hard skill to perfect too, as if the joke is too ‘in-your-face’, a younger child would notice and just get all confused and want to leave. However, unlike most clever jokes, these were not of the expected raunchy nature that is often used in order to keep the adults amused.

This being a rewrite of a literary classic, was filled to the brim with subtle little quotes from Shakespeare’s finest works. From the very first shot of the two houses where the story is set (which, funnily enough, lie on none other than Verona Drive), all the audience members with an ounce of literary knowledge smirked at the house numbers, the names of the house owners, the very road on which the story never leaves. Some jokes were far more subtle than these, hidden in dialogue of passing gnomes throughout, making reference not only to Romeo & Juliet, but to Macbeth and other famous Shakespearean works; and of course, when you’ve noticed one, you are kept on your toes for more, listening intently to the voices of Michael Caine or Maggie Smith (this is me name-dropping, subtle aren’t I?) for some more of the writer’s hidden gems.

As you can expect, the graphics and such were faultless, and the whole 3-D thing made it all the more cool. You can’t really expect anything less with modern technology, can you? I’m beginning to sound like an old lady. Moving on. What did impress me was the effort that was put into making the gnomes appear as if they really were ceramic. Every time they moved, you could hear them clink! I don’t know why, but this really caught my attention, and I thought the detail that went into this deserved recognition. That may just be me getting over-excited though. Again, moving on.

The story was captivating, and was true enough to Shakespeare’s version to avoid a medieval slaughtering by the Secret Underground Literature Society (Not so secret anymore. You didn’t hear about them from me, okay?). Through to the end, there was a clever approach on every feature of the story which allowed it to be more child-friendly. I was surprised to see they actually did kill off the evil Tybalt! Those of you complaining about spoilers, shush up, we all know what happens. If I were totally honest, I would say that I was a tad disappointed that Gnomeo and Juliet didn’t die as they rightfully should have, but I suppose you can’t really hope for that in a kid’s film. Does that make me sound a tad evil? I meant to come across as loyal to Shakespeare, not as a mad gnome killer.

I’ve done that thing I do when I steer wildly off topic, haven’t I? It’s okay, I’ll wrap it up.

This film really is the type that has something to get the whole family laughing, from the little blatantly funny and cute stone rabbits, to the gnome that bears an uncanny resemblance to executive producer Elton John, to the barely recognisable puns referring to our favourite playwright. It may be rated U, but don’t let it fool you; you will laugh at it. Guaranteed. In fact, if you find me somebody who sees this film and doesn’t enjoy it, then I will eat my own hat. Or at least, as much of it as humanely possible. Go on, take the challenge. I dare you not to laugh once.