Home » News » Things To Do » Star Wars To Be Turned Into Sitcom. 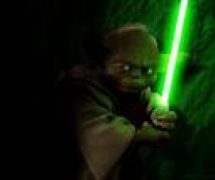 I have. I feel special about knowing of the existence of a series of movies based on the struggle between good and evil. Or something or nothing.

But, how would you feel… if Star Wars had it’s own sitcom? What if I told you that Seth Green and Matthew Senreich, the creators of Robot Chicken (??), have been hired as creative consultants for the sitcom?

George Lucas, the dude who created the Star Wars films has confirmed that there will be more Star Wars for the lucky, lucky public, but in humourous situations…

Although dismissed originally as an April Fool’s joke, Lucas’ company has revealed that they are working on an animated series that will poke fun at the sci-fi movies. Maybe he’s thought of different ways to reveal Luke Skywalker’s relatives, either that or numerous IT’S A TRAP! jokes… happy days, eh?

Many fans have voiced concerns that previous attempts at adding that sprinkle of humour into the space saga had failed. ‘Star Wars’ fanatics on internet forums have cited both ‘The Phantom Menace’’s ‘comedy’ character Jar-Jar Binks and the 1978 holiday special as examples of how it can go badly wrong.

The latest spin-off of the film series follows the well-received “Star Wars – The Clone Wars” cartoon launched in 2008. Well-received by who, that’s what I’d like to know…

Anyways, The producer of this cosmic sitcom, Jennifer Hill, stated that she is not worried about the criticism.

“I am not worried about the criticism”, she said, adding “With the team we’re establishing, Matt Senreich and Seth Green, it’s going to be really fun and funny to the public. So I’m not too concerned about that.”

So yeah, Star Wars is going to be a sitcom…