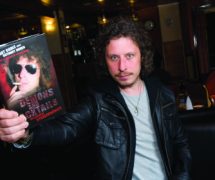 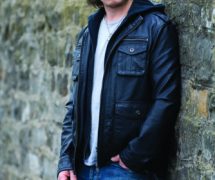 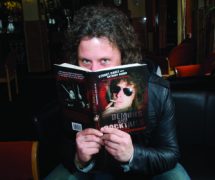 Interview from Issue 7 of PLUGGED IN magazine

I shook his hand. The Jaggerman then stopped in his tracks and the pleasantness suddenly left his face. ‘Who’s eating that?’ He pointed to the half-eaten plate of shepherd’s pie on the table, which was littered with cigarette butts and cans of beer.
I put my hand up like a schoolkid in a class asking to go to the toilet.
He chuckled and made a face, rolling his eyes to the ceiling. ‘Do you know the rules?’
‘What rules?’ I replied.
‘There are only two things you don’t do when you tour with us’. He seemed to take pleasure in what he was about to say. Again, everyone stared at me and then back towards Mick. ‘One’ — he held his finger up — ‘you don’t play on the snooker table unless you’ve been asked…and, secondly, you never, ever, take the shepherd’s pie unless Keith’s broken the crust first’.
Kelly and John, our manager, shot dagger eyes at me.
I didn’t f***ing know there were two things we weren’t supposed to do when you tour with the Rolling Stones, and if I did I wouldn’t think that eating f***ing shepherd’s pie would be top of the list.’

The afternoon is hot and the sweat trickles down my back as I drive though the busy streets of Trecynon on the outskirts of Aberdare searching for a place to park. I need something cold to drink and a quiet room to remove me from the stress of my daily routine. Luckily for me my destination was The Welsh Harp for a meeting with local hero and legendary rock drummer Stuart Cable, a perfect retreat away from the traffic. I was early but this meant that I could watch Stuart’s entrance — which was like a whirlwind of bustling energy, saying quick hellos to the regulars that all know him personally, then shouting “alright Da” across the pub with a wave of acknowledgment before coming down to rest in the seat opposite, leaving a wake of conversation and laughter behind him. Yes, Stuart Cable had arrived.
He looks fit and well drinking orange juice, making me conscious of my obvious paunch which I try to disguise behind my pint of Guinness that was now slowly warming due to the heat of the day. We start making small talk about PLUGGED IN and this latest issue.
“Manics, brilliant. Future Of The Left, excellent.” Both said in his strong Dylan-Thomas-esque barotone Welsh accent.
Stuart has been an avid reader and supporter of PLUGGED IN, along with his band mates in Killing For Company, and presented Gail and myself with the Red Dragon Welsh Award for Community Music last year. And likewise we have followed the growth of his exceptional new band — which we will come to later. But firstly we needed to talk about his book.
It’s been six years since Stuart parted ways with the other members of the Stereophonics, his childhood friends Kelly Jones and Richard Jones. Around the time varying versions of the events that lead to his expulsion from the band circulated around the press with people speculating on the reasons why and who to blame. Now with the release of his book Demons And Cocktails, My Life With Stereophonics we get a true picture of the circumstances leading up to his departure and the reasons for it. But it’s also about the birth of a band and its hard climb to the top.
So is the book a way of answering those questions that you’re always asked, laying the ghosts to rest?
“It wasn’t that I felt I was laying any ghost to rest but a way of letting the people who cared about me and the band know how the sacking came about. Also how the situation was handled by Kelly who wanted to paint a picture that made himself look better through the whole ordeal when really he was the root of the problem. Even now Stereophonics is about Kelly Jones, not the other members of the band. Towards the end of making the last record that I played on, You Gotta Go There To Come Back, Kelly wanted to do everything. Write the songs, produce, even do the album cover. I started to think that there was no point in me being there really. One of the things I liked doing was the interviews, being vocal, the public face of the Stereophonics. That’s what I believed a group was all about, taking different skills into the different areas. Kelly was a great song writer but rubbish at interviews. But he never wanted to be left out, always the frontman and with You’ve Gotta Go There… nobody wanted to speak to Richard or myself. Everyone perceived the album as Kelly Jones and the Stereophonics and although he said that he didn’t see it that way, that was the way in transpired. Every interview on the record’s promotional tour both me and Richard were ignored.”
Within the book Stuart talks about the little upsets that became big upsets that leads to his final departure but as he explains although Demons And Cocktails is a vehicle to explain why his sacking happened it was never the sole reason for writing it.
“It came about by accident really. I got to know this guy called Anthony Bunko who produced a local rag mag which was on sale in this pub. After a party at the pub we got talking about the Stereophonics and he said I must have had some mad times, so I told him the Keith Richards shepherd’s pie story. He asked if I’d ever thought of writing a book, so I told him I had considered it but never found anyone to ghostwrite it with me. You see I wanted it to read like I was speaking, rather than use big words with over 15 letters that everyone who knows me knew I couldn’t spell, let alone tell you what they meant. After sending off some test chapters to John Blake publishing, Bunko spent eight months getting inside my head. Although a major part of the book is the downside of the Stereophonics I wanted it to show the happy side of being in a band, getting that elusive record deal and living the rock ’n’ roll dream. I was never going to waste my time writing a book that just wanted to slag Kelly off. There was more to my life and I wanted to tell the truth of what happened.”
And this is what comes over in the book. Stuart, despite the way he felt treated, never talks about Kelly other than on equal terms. In fact the respect he still holds for him as a song writer quite often comes through.

He sat in front of the piano and started playing. I didn’t realise he could actually play the thing… ‘Stu, I’ve written this thing. Have a listen’. He then played “I Stopped To Fill My Car Up”.
When it finished he nervously asked me what I thought.
I think I said, ‘F***king hell, Kel! We’ve got to record that on the album tomorrow. It’s brilliant.’
Though Stuart knew that his time was nearly up with Stereophonics the ending was sudden and so badly handled that it drove a rift between Kelly and himself that still taints their lives today. He received a call from Kelly when he simply said, “Hiya. That’s it, butt. It’s all over: you’re out.” He knew it was coming but the two agreed to keep it quiet until they could talk together about putting out a statement. That never happened though, and after an embarrassing phonecall from Owen Money on BBC Radio Wales, who told Stuart he had a press release in front of him announcing his departure, Stuart freaked.
“He has said sorry, though he knew what would happen when the press release hit the wire.”
After his dismissal, Stuart didn’t see Kelly for over two years until they finally met at a Tragically Hip concert in London.
“I’m a straight talker. I said to him that I couldn’t believe that after all the years we had been together that he could scrape me off his shoe like a piece of sh*t. Though I also pointed out that it’ll hurt him more than it’ll hurt me. I was his best friend. Kelly had got quite tearful and kept saying he was sorry but by that time I couldn’t give a f**k. And with my hand on my heart I can honestly tell you that I didn’t care about being in that band anymore. I’d had the best part of three years of him saying this is how it is and this is how it isn’t. The unfortunate thing about the band was that Kelly became to big for his boots and didn’t realise that it takes certain personalities to come together from nothing to make a product that is saleable and admired. Once you take an element away what do you have left?”
So did you write this book for Kelly Jones?
“Not at all. The main reason was to tell people about the rock ’n’ roll life and where I came from. My father died when I was 10 and my brother was 17, and for years we didn’t see eye to eye. But now I’m older and wiser I understand the pressure he was under. All of a sudden my father passed away and he became a substitute head of the house with this young retrobate to look after. My mother worked most nights at the Working Men’s Club so he had to babysit me when he should have been out drinking with his mates and shagging girls. The book lets people know that you can be successful despite all the bad stuff that happens in your life. If you believe in your ability you can rise to any level. Also understanding my brother’s plight has drawn us back together and I’m pleased to say we are great mates now.”
Do you not feel, though, by writing this book you’ve opened up your life to scrutiny, both the positive and negative aspects? Do you not feel vulnerable?
“I don’t think I feel vulnerable, well not until you asked that question! To be honest, it was something I sat down and said to Bunko. If we’re doing this book, it’s got to be warts and all, we’re not going to hold stuff back.”

Demons And Cocktails, My Life With Stereophonics is published by John Blake, £17.99 — check it out at Amazon