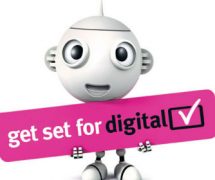 It’s roughly quarter past eleven as I write this, sitting in my bedroom. Watching something on BBC One since I don’t have digital in my room. And as the ever moving hands of the ticking clock reach a new day, analogue will cease to be used.

And yet, this is not the last of the digital switchover.

You may not know, but it’s not just the beloved television that will be getting the digital treatment. By 2015, the plan is that all radio from the well known FM format will switch to DAB, which, if you didn’t guess, is the radio equivalent to digital.

Between 50 million and 100 million radios, including 20 million fitted in cars, will either need replacing or converting to receive the DAB signal after the switchover.

Even the ministers in the House Of Lords are going into this, filing a report that discovered that there was “public confusion and industry uncertainty” about the switch. It was also found out that there was no real understanding over the radio switchover, though the benefits of the switch to Digital TV are well understood by the public.

The cost of the switchover is also questioned, with the Lords highlighting the high cost of broadcasting in both analogue and digital at the same time, especially for the broadcasters in the struggling commercial sector.

The report stated “No-one can be satisfied with the present position. There is an urgent need for clarity which was emphasised by almost all those who gave us evidence. If nothing is done then there is a danger of a major public reaction when the radio switchover policy is implemented.”

So, what are the advantages and disadvantages for digital radio?

Well, on the plus side…

– You will have better audio quality.
– You will also be able to see the information of the song name, artist, ect, which will be displayed by the consumer.
– A single digital frequency can carry multiple audio lines, meaning a single radio station can transmit say rock and jazz at the same time.
– There is no need to re-tune also.

But, one the negative side…

– You will need to buy a radio that accepts a digital signal.
– Like Digital TV, they are affected by the weather. So, don’t expect to listen to the radio in 2015, as you drive down the A470 in the pouring rain.

So, as my television in my room accepts the waves of analogue for the final time, I will finish. That, and there’s a bag of Haribo downstairs… who cares if it’s twenty to twelve in the night?