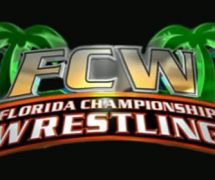 ‘Sup everyone, it’s me again, you know, Rhys, with another radical review! This one may seem delayed due to the date, but it’s not really since the videos for this episode of wrestling I’m reviewing only got posted on Youtube today, or while I was asleep or whatever. Either way this is a review about the WWE’s developmental territory that is Florida Championship Wrestling or FCW if you like abbreviations. To explain things quickly, if you thought that every new face that ends up on main WWE television just gets signed and gets put on the show off the bat, you could not be more wrong (even though the likes of Sin Cara and Kharma didn’t start off in FCW). But the regular faces you sometimes see on WWE television, such as Sheamus, Wade Barrett, Alex Riley, Mason Ryan, AJ, you know all those new and fresh names in the WWE scene, they all started for a little while (or some cases a long while) down in WWE’s training development centre, even though some may not have needed as much in some people’s opinions. This is basically done to show that these new talents can work in WWE’s style of wrestling, and they can’t work with different gimmicks and personalities to see how well they will cope on the main show, and once they pay their dues, IF they pay their dues, they will eventually be brought up to main WWE television, or intervision (very witty of me) in the case of NXT.

However with this review I’ll explain somewhat more than the Raw review due to the show being half as long, and because there are so many new faces that you’ll need to know who they are, and what storylines are happening currently, though sometimes I don’t even know those myself (shameful I know). But anyway let’s get this thing reviewed shall we?

Calvin Raines & Big E Langston defeat Los Aviadores (Epico & Hunico)
Live events truly can change plans on television as Calvin & Langston won those tag title in one of those live events defeats the champions Seth Rollins and Richie Steamboat, so as said this was indeed their first chance to show the world what they can do as champions (and by world, I mean Florida and YouTube). To be honest I didn’t think this was a great opening match as there was quite a bit of miss-connection with what moves should have been done, selling too early, selling too late. Los Aviadores were purely better in the match, but even still, these two teams did not have good in-ring chemistry. Hopefully this was an off-night for Raines and Langston otherwise I won’t be enjoying this Raine (hehe) very much.

Brad Maddox & Peter Orlov in ‘The Referee’ Segment
We all have different types of humour, but this was the type of humour which made me facepalm followed by a headdesk, and if you don’t what those are, lets just say this was beyond cringe-worthy for me. I like Orlov, heck of a talent, but I truly believe that pairing him up with Brad Maddox is bringing the guy down. But maybe I’m being too judgement since I never truly watch every single segment and match on FCW tapings. But either way, no more of this anymore please.

Percy Watson defeats Bobby Dutch
I swear I’d NEVER watch one of the man’s matches, but I guess you guys got me to look past my hate of Percy Watson and to TRY (that’s the keyword here) and call his action fairly.

Now even though I knock/bash/hate on the man, he is quite the performer in the right, he does beautiful dropkicks to be fair. The match itself was better than the tag team match that started the show, but that’s not really saying much in all honesty. I’ll say it was good at best, but like William Regal commented after the match finished, both have done better so it wasn’t their best match.

Eden Stiles interviews James Bronson
Most of these promos are bland half of the time from how WWE has their main roster and developmental talent speak in a specific way, but this James guy, he has a certain uniqueness about his voice that actually catches my attention. Not saying he’s a CM Punk in the ring oh no, Bronson speaks just as slow as most of the FCW talent does on the mic, but his voice is interesting and he makes you listen. Though he needs to think of some better material other than that spaghetti nonsense, and like that random fan shouted after it, ‘What?!’

Rick Victor VS DeSean Bishop
I’ve never seen either of these two in some wrestling action, so it was interesting to see how both would work on their own styles. Both of these men seem to have a very solid style which works quite well for them, the barely did anything wrong in the match, so it wasn’t a bad match by any means. Things can only get better for these two, just a little while longer to learn from their craft and they can make it big in the FCW someday.

Eden Stiles interviews Leakee
Haven’t heard much from Leakee in his promo work, he’s decent enough in the ring, but his promo ability is average, but I expected this since he is the typical FCW promo talent. Maybe he can get better, hopefully he does since it looks like this guy is getting more and more exposure by the passing weeks/months.

FCW All Stars (Maxine, Lucky Cannon, Aksana & Damien Sandow) in the ring quickly just for Maxine, the current on-screen General Manager of FCW to make a match between Lucky and Mr. Florida aka Bo Rotundo, and she manages to forget a line doing so nice job girl, they weren’t asking for much.

By the way I’ll also add that Lucky Cannon is currently the top champion in FCW, the Florida Heavyweight Champion, while Aksana is both the Queen of FCW holder (that silly little plastic crown on her head) and also the FCW Divas Champion, just to avoid any confusion if there ever was any.

Lucky Cannon VS Mr. Florida (Bo Rotundo)
Bo Rotundo is of course in the crowd eating some popcorn and whatever else, and of course out comes Mr. Florida, looking slightly different as he is more pumped up in shape than the last week I though steroids were banned from WWE’s drug wellness policy. ;-P

The match itself with the fake Mr. Florida and Lucky was alright, nothing special, but this masked man too did great dropkicks, that’s the only real thing that stood out in the match. Of course Bo spears Lucky mid match so he would lose, and spear everyone in the ring except for the divas and stand alone in the ring. But you know, I didn’t mind really cause he speared himself in a sense, which was somewhat strange to see.

Okay so now it’s that time again, for the GOOD, BAD, aaaaaand UGLY!

Good
James Bronson promo
Rick Victor VS DeSean Bishop
Dropkicks from Percy Watson & Mr.Florida imposter
William Regal on commentary (had a few good funny moment, plus he was also factual at the same time, which is a nice thing to see in commentators)

Bad
Calvin Raines & Big E Langston VS Los Aviadores
No Divas action (what, they are better down in development than they are on main TV, fact!)

To rate the show out of ten, I’d say 5/10, it wasn’t too bad, but it would great either, just around about the average. And in stars 2.5, half for both ratings.

If I see anymore FCW’s on YouTube that are released, I’ll be sure to post them up and review them as much as possible, since we should expect another 2 tapings to be uploaded before next Sunday, which would be another taping. So until my next review, so long from the Cynon Valley area. (If you watch all of FCW and the very end, you’ll get that reference ;-P)