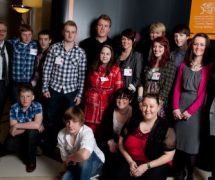 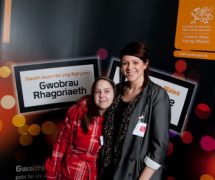 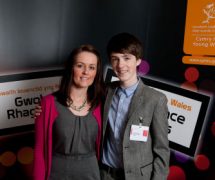 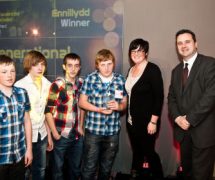 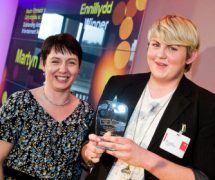 The Youth Excellence Award is a National event where youth and youth workers all over the country are nominated for their considerable contributions and talents in one of 12 categories, ranging from Volunteering, Art, Bravery etc.

The Youth Excellence Awards ceremony this year, was held at the Quay Hotel, Llandudno on Thursday 17th of March, with its amazing views of the marina from the buffet table, and floral arrangements garnished all around – It was a beautiful setting to appreciate the young people and youth workers.

Before the announcements we had a special performance from “Mr Phormula” the bi-lingual beat-boxer who had played everywhere from Brooklyn to London. Also, Tom Richards performed a set at the event, Tom got to the Boot Camp stage in last years X- Factor.”

Rhondda Cynon Taf had huge success this year, with three young people, a youth worker AND a youth project all shortlisted!

Leir Rockett was nominated for the “Bravery and Courage Award” – Leir had previously only been able to talk to her mum, and never getting involved in any outside projects, now she is far more confident and takes part in many youth activities.

Stacey Oliver, a Detached Youth Worker in the Hawthorn Cluster has worked very closely with Leir, and was nominated for this award by no less than three of her peers! All of them saying “Stacey makes a real difference.”

Ystrad Mynach’s Intergenerational Project was shortlisted for the “Outstanding Youth Project Award.” The group of young people are all students at Treorchy Comprehensive School and as a pat of the project, they made a mosaic that is displayed in the courtyard of the recreational centre. The projects primary aim was to introduce the older citizens to the young people and vice versa, to lessen the gap between the generations.

Liam Roberts from Aberdare was nominated for “Outstanding Contributionto Sports Award” at this year’s ceremony. His Detached team told usabout how enthusiastic he is, and how far he has come in his sportingachievement over the last year.

Wicid.tv’s very own Ricky Paveltish was shortlisted for the Arts and Entertainment Award for his enthusiasm and contribution to everything he becomes involved in. Ricky has a weekly show on Dapper FM which has quickly become the most listened to show on the station. He regularly plays gigs in his local community, and plays acoustic sets – This love of music is a great contribution to Wicid.tv, as he is also a much-loved editorial team member.

And finally, Martyn David, another Wicid.tv editorial member had also been nominated for the Arts and Entertainment Award for his work with the website, GTFM 107.9, e3+ and Hawthorn High School’s termly newsletter “Wazzup At Hawthorn” as well as work with Plugged In, Valleys Kid’s Youth Theatre and Zoom Cymru/TV.

We walked away with TWO awards that day! Martyn David won out 800 applicants for the “Outstanding Contribution to Arts and Entertainment Award” he told us “I was shaking as the other shortlists were announced and my heart was in my throat! When Mae; Our presenter from BBC/Sky News, said “And now, the boy who is after my job – I couldn’t believe it, there was lights and music going off and everyone was clapping, it was one of the proudest moments of my life – And the photo is hilarious, have you seen the face I’m pulling!?”

The Ystrad Mynach Integeneratioal Project won the award for “Outstanding Youth Project.” The young people raced to the stage with their Detached youth worker Lynne who commented “We’re all so proud, I mean, although the boys aren’t showing how much! They’re so excited and in years to come they’ll look back and realise what a huge achievement this is!”

Louise Cook, head of Rhondda Cynon Taf’s Services For Young People told us “I’m beyond proud, and quite emotional actually! All the shortlists deserved the award and we’re all proud of them and a massive congratulations to the winners. It makes me appreciate my job so much – We’ll definitely need to celebrate when we get back to RCT!”

We’ll hold her to that, open bar for the over 18’s maybe Louise?