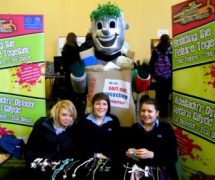 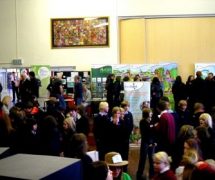 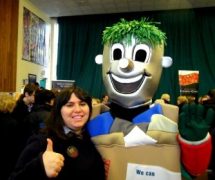 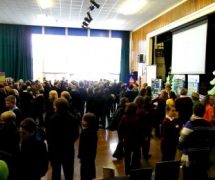 On 19th December 2011, TreorchyComprehensiveSchool held an Eco Day which gave the pupils a chance to become familiar with local companies and organisations, to help inspire them to reduce their carbon footprint.

There were a variety of different organisations, projects and companies that filled the main hall throughout the day such as RCT’s Catering Services, who were giving samples of low fat foods and vegetarian foods and questioned the pupils as to whether they knew what the foods actually were. They also showed pupils what was in their favourite foods such as a McDonald’s meal or a chocolate bar. The school’s own eco committee were also present at the day, with questionnaires for the pupils, and were teamed up with RCT’s SORT team and Rhondda Cynon Taff’s very own eco hero, Rhys Cycle, who was happy enough to pose for photos with the pupils for the school photographer of the day (*cough* me *cough*). Other stalls included were Bag 2 The Future, T.E.D.S, Building the Future Together and the school’s cadets.

Another stall which really caught my eye was a jewellery stall made out of recycled and reused items. The girls from year 9 had worked very hard and the jewellery looked fantastic. There were many people that were highly interested in the girls work and they sold quite a lot, raising money for the school.

The eco day was very informative and pupils learnt quite a lot of facts about the environment. Here are some facts that may be useful to you:

The UK uses a forest the size of Wales every year in paper
Each UK household produces over 1 tonne of rubbish annually, amounting to about 31 million tonnes for the UK each year
Every year, the average dustbin contains enough unrealised energy for 500 baths, 3500 showers or 5,000 worth of television
On average, every person in the UK throws away their own body weight in rubbish every seven weeks
In less than 2 hours, the UK produces enough waste to fill the Albert Hall

All the pupils and staff enjoyed the day and felt as if they had gained something from it. Do you have a green finger or like to do things to help the environment? Why not comment below what you do? Or maybe you were present? Why not tell us what you thought of the day?