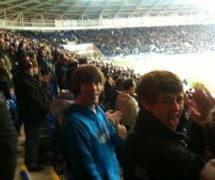 The Trealaw football boys took part in a 2 day coaching course with the detached youth team which concluded in them going to watch Cardiff City v Leicester City at the Cardiff City Stadium and achieving a basic football skills award. The trip to Cardiff City was kindly paid for by E3 staff and supported by the Detached Youth Team.

This was a highly successful project, where the young boys took part in a number of drills set up by myself and Ryan Strong plus a number of drills they set up themselves and delivered to their peers. They then organised 5 a side games at the end of the session which were refereed by the detached Team, it was very well organised by the boys and they certainly showed a high level of skill, maturity and ambition.

The boys did themselves proud over the two days and fully deserve their OCN qualification in basic football skills.