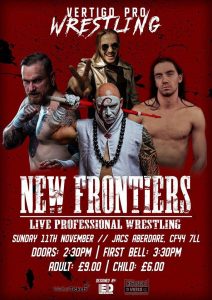 Hello Wicid…. Watchers? Ugh. If someone has a nice punchy tagline to call all our readers, comment below because I’m not creative enough right now to think of one.

This was Vertigo’s first show back since their Perfect Storm 2 show on February 4th 2017, so they had a lot riding on this show to impress. They did have help from some outside help in the form of the newest wrestling promotion from Swansea, Exist Pro Wrestling and the All Style Pro Wrestling Academy. A number of talent were part of their first show last month. So this show had a lot of new faces being featured, with the odd few that I recognised.

The turnout of people for the show was pleasantly surprising. It was a smaller crowd, but they filled out a majority of the seats they set out, and it was DEFINITELY more people than their last show in Cardiff, so that can be considered a success. And despite being small, the level of engagement and involvement from the crowd was great.

The opening match featured the plucky masked marvel, The Flying Grayson going off against the messed up force of Solomon Jack. Solomon’s main focus was simply hurting Grayson as much as he could, all the while smiling from ear to ear in delight with every hit and slam. The Flying Grayson however was able to power out of many close calls and barely picked up the pinfall victory thanks to the support of the Aberdare crowd. A very fun opener that got the people into the rest of the show. 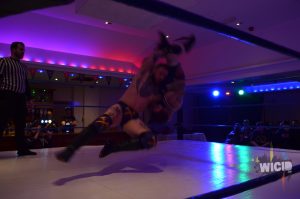 somewhat more happy to be performing for the Aberdare crowd, while Bishop was constantly heckled at by the little kids in the crowd, much to his disapproval. Bishop mostly dominated the match overpowering Reven, though he did have some big moments himself, fighting back with heavy offence. He even kicked out of Bishop’s Death Valley Driver, a move he has used to put many an opponent away. Sadly it wasn’t enough as Bishop picked up the pinfall victory. 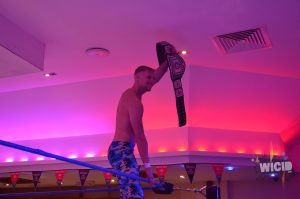 Now this is where I had to do a bit of research into the involvement of Exist Pro Wrestling and the All Style Pro Wrestling Academy as the All Style Pro Wrestling Progeny Championship was not around during Vertigo’s last run. The first champion was crowned at their first show this year on 21st October 2018 in a four man tournament. That same first champion was defending the belt as the Progeny winner Tom Ferriman faced off against “The Cardio King” Adam Carter. Trying not to bring this around to other training academy’s, but I had a feeling I recognised Tom from somewhere before. It wasn’t until seeing him in person that I realised it was the same person who I remember training with when I first started with the Dragon Pro Wrestling academy. He since told me that he dropped training with them around a similar time I did the same, except he moved on to finding a different path to become an active independent talent when he started back up after a brief hiatus. Kind of a full circle thing here which made it all the better since Tom from the short time I trained with him was always respectful.

This match was definitely the most light-hearted bout we had seen of the night as throughout the two had a smile on their face and shook hands a few times as they kept trying to one-up each other, almost like a friendly rivalry type of vibe. Adam lived up to his moniker as his stamina kept up with Tom’s agile movements, it really could have been anyone’s match. Though it was the champion who managed to retain in his first title defence with an elevated Double Knee Facebreaker to Carter for the pinfall win. The two raised arms as the crowd went even more pleased heading into intermission.

Side mention of intermission, nothing major just some funny observations. The fire alarm for the building went off, and then made me think of the both hilarious and totally anxiety heavy thought of what if something like that happened during a wrestling match. Like, do you carry on, or do you actually stop in case an actual fire is happening? Either way, there was no fire, everything was fine.

Also there didn’t seem to me much exclusive merchandise from the talent during the first half which was a shame. This did change as Bishop and one of the later talents had some of theirs, but some of the kids and one or two adults were asking about different merch other than what Vertigo had. I know a few of the kids were genuinely upset Tom didn’t have anything. Barely a few matches in and he already has kids asking about buying stuff from him. That’s a good sign.

After the intermission was another match between two debutants. Vaughn 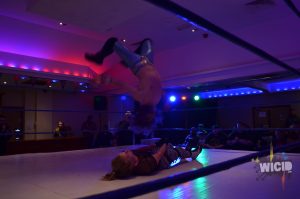 Vertigo who was a fun loving  dude with long hair that makes you feel new types of self loathing against the narcissistic Beau Bjornman. Beau had this whole cat-walk model type of thing going on as his attire was all types of fierce, as some people might stereotype it. He laughed at how Vertigo’s ‘Blue and Gold was SO Late 2017 and made more jabs at his appearance while being very self indulgent throughout the match. He also used sneaky tactics to try and gain the advantage in the match whenever he could to the dismay of everyone else.

The crowd was very much behind Vaughn from the start though as he was very playful to begin with and having a good ole time with everyone doing some great manoeuvres that got some nice reactions from the crowd. Those only intensified as he fought back from the underhanded attacks from Beau using more speed and quick thinking, even a dive or two for good measure. Towards the end Beau nearly used a small fragrance bottle on Vertigo for a dirty win, but Huw the referee managed to get it away. Vaughn predicted this, countered and hit a top rope Swanton bomb from the top, barely missing the low ceiling and getting the pinfall victory.

Jezz Gardner, a mainstay with vertigo since its creation, was in action against the other finalist in the All Style Pro Wrestling Progeny Championship Tournament, Curt Altas. Curt was the much larger of the two as he kept manhandling the much lighter Jezz by legit throwing around the ring, tossing him outside, hitting him on all wooden surfaces in the bar area. He genuinely wanted to hurt the threw Jezz around at the start and got quite vicious when he fought with Jezz on the outside. However Jez managed to fight back against the powerhouse progeny runner-up with his hybrid offence of quick strikes and high-flying athletics. This led to the purple clad athlete to pick up the pinfall victory to the delight of the crowd and the frustration of Curt Atlas. 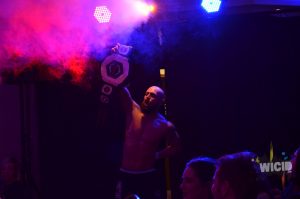 A hard fought match ended Vertigo’s returning show as the challenger Elijah faced off against the defending champion, The Red Emperor, Gideon. Small mention, Gideon was able to defend the Vertigo Heavyweight Championship at Exist Pro’s first show where he retained against two previously mentioned names, Bishop and Jezz Gardner in triple threat action. This time is was another Vertigo regular who want to show why he really had Nothing To Prove.

The intensity this match was something different compared to the rest of the matches on the card, and not just because of it being for Vertigo’s main prize. Elijah had a dead-set focus on Gideon and made sure to pull out as many of his well-known sneaky manoeuvres that he pulls out at the most unexpected moments of the match well thought, though he did get a little bit desperate as the match went on. Gideon started out heavy hitting and calculated, even brawling with Elijah on the outside much like the previous match, throwing him onto the bar station at one point. But as the match went on, his adrenaline went through the roof and his power and speed was something else entirely, and everyone got even louder alongside him.

Elijah saw this and made use of the referee, knowing into Huw, so Elijah used this to hit Gideon with the Vertigo championship title. Luckily Gideon kicked out. Whilst arguing with Huw, Elijah low blowed Gideon from behind him while Huw couldn’t see. After this, Elijah rolled up Gideon by using his tights while Huw couldn’t see to win the Vertigo Heavyweight Championship through less than honourable methods. The crowd did not like this one bit as after Elijah slithered his way to the back, they kept chanting for a rematch as Gideon was beside himself.

But at the end of the day, shenanigans or not, Elijah is the new Vertigo Pro Wrestling Heavyweight Champion in this revival of the promotion. But will Gideon get that rematch that him and the live crowd in Aberdare want? Or will it go to someone else? Vaughn Vertigo seems to want a gain the championship with (part of) his name attached to it, as do others I’m sure. Will the next event even be in Aberdare? While Vertigo would like to return there, who knows, maybe they will have an earlier show somewhere else before then. Either way, this was genuinely a fun show to help at and a nice change of pace from other places I have covered in the past. Hopefully I can cover a future Vertigo show. By then I may be moving over to my own independent blog site if it is after June since I can’t stay with Wicid after then. But whatever happens, it’ll be interesting to see where Vertigo goes from here.