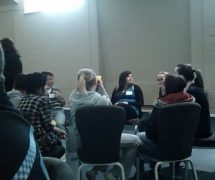 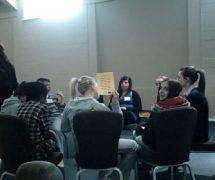 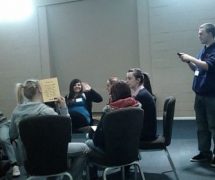 On 4th May, the Ferndale detached youth workers Allyn and Tracey along with Jess and Lee the PCSO from the area took 9 young people to the WAG Consultation Event in Cardiff at the All Nations Centre.

Funky Dragon staff ran workshops for the young people, and discussed the United Nations Convention on the Rights of a Child (UNCRC) and the South Wales Consultation Event for the Proposed Rights of Children and Young Persons (Wales) Measure.  This was to know what young people thought about the proposed measure.

The Funky Dragon staff asked young people their views, and instead of writing their responses, the young people had areas to walk along. There were paths leading to Agree, Don’t know and Disagree, and they had a chance to voice their opinions and reasons for their choices of where to stand.

Funky dragon counted the numbers of young people at each area as evidence to send back to WAG. There were also workshops running where the young people learned about the Children’s Commissioner, rights, laws and measures, and the UNCRC articles, and how they would go about telling other young people and adults about their rights.