Wicked was actually the first musical I have seen live and I was completely and utterly swept off of my feet! 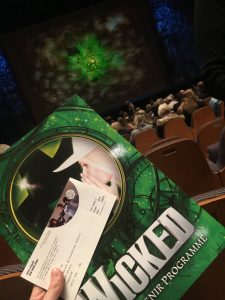 Where to begin? The lighting, set, props and costume were all visually spectacular. Each note sung, each step danced I was constantly absorbed and amazed. The atmosphere you get in the Wales Millennium Centre theatre is so unique, you’d struggle to match it anywhere else; especially with a musical as highly recognised as Wicked. You can be sure to say that if you haven’t seen it yourself you’ll be sure to know someone who has.

I found the green theme so vibrantly distinctive. I had the amazing opportunity to attend the press night at the Millennium Centre and they played the part of hosts extremely well as per usual. The drinks, snacks, balloons and even the lights of the centre itself were all green, perfectly in tune with the evening! 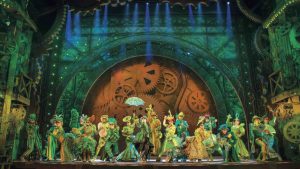 I cannot express how impressive the set was, I was astounded. Words wouldn’t even do it justice if I tried to put it into words. Coming for someone who is studying A-level drama, the best props we can rely on getting our hands is a couple of stools, huge set envy for myself! It wasn’t just visually pleasing on the eye, the transitions between scenes were effortless, it took seconds. You’d find yourself in a dull dorm room watching Elphaba and Glinda and then all of a sudden you were in the land of green, green Oz. 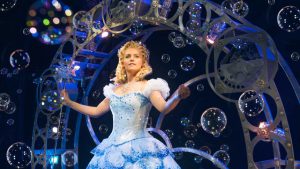 I believe the casting was done very well, everyone played their roles brilliantly. The cast features Amy Ross as Elphaba, Helen Woolf as Glinda and Aaron Sidwell as Fiyero. Those three in particular were all so emotionally involved with their characters that I was hooked, I was fully invested in the narrative. I’m not going to spoil anything but I was in tears after an incredible performance from Sidwell. Creditable mention to Steven Pinder as The Wizard & Doctor Dillamond, Kim Ismay as Madame Morrible, Emily Shaw as Nessarose and Iddon Jones as Boq. 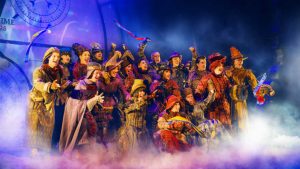 I found the plot connections to the Wizard of Oz ingenious, however I can understand those who perhaps took the show rather literal and may find some holes in the story line. The re-imagination of the original story created by L. Frank Braum in ‘The Wonderful Wizard of Oz’ tells the extraordinary adventures in Oz and I found it brilliant!

The only criticism of the whole show for me was during the scene where the witches arrived in Oz, the lighting was a little too bright for me. I really wanted to enjoy the costumes, song and dance in this scene but found I couldn’t look at the stage for too long without my eyes aching. A small criticism in a hugely impressive production! 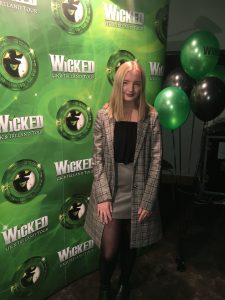 Thank you to the cast of Wicked for putting on a spectacular show and once again to the Wales Millennium Centre for being so welcoming!

Find out what else is going on by clicking here.

Keep up to date with all things WICID below: